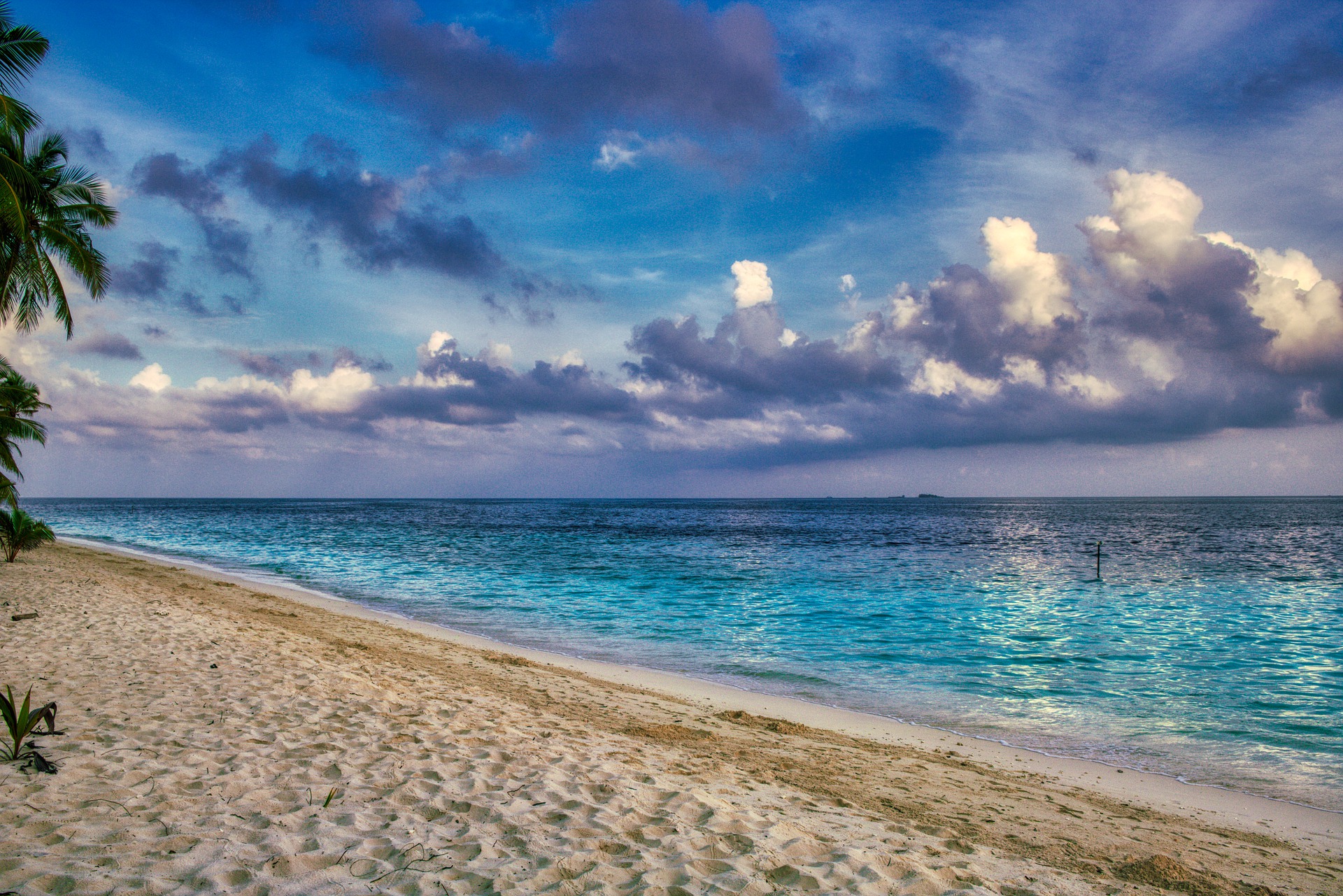 Maldives, in full Republic of Maldives, also called Maldive Islands, independent island country in the north-central Indian Ocean. It consists of a chain of about 1,200 small coral islands and sandbanks (some 200 of which are inhabited), grouped in clusters, or atolls.

The Maldive Islands are a series of coral atolls built up from the crowns of a submerged ancient volcanic mountain range. All the islands are low-lying, none rising to more than 6 feet (1.8 metres) above sea level. Barrier reefs protect the islands from the destructive effects of monsoons. The rainy season, from May to August, is brought by the southwest monsoon; from December to March the northeast monsoon brings dry and mild winds. The average annual temperature varies from 76 to 86 °F (24 to 30 °C). Rainfall averages about 84 inches (2,130 mm) per year. The atolls have sandy beaches, lagoons, and a luxuriant growth of coconut palms, together with breadfruit trees and tropical bushes. Fish abound in the reefs, lagoons, and seas adjoining the islands; sea turtles are caught for food and for their oil, a traditional medicine.

The population of Maldives belongs almost entirely to the Maldivian ethnic group, which is the result of various peoples settling in the islands successively through the country’s history. The first settlers, it is generally believed, were Tamil and Sinhalese peoples from southern India and Sri Lanka. Traders from Arab countries, Malaya, Madagascar, Indonesia, and China visited the islands through the centuries. The official language is an Indo-European language called Dhivehi (or Maldivian); Arabic, Hindi, and English are also spoken. Islam is the state religion.

More than half of the population is considered rural. With the exception of those living in Male, the only relatively large settlement in the country, the inhabitants of the Maldives live in villages on small islands in scattered atolls. Only about 20 of the islands have more than 1,000 inhabitants, and the southern islands are more densely populated than the northern ones. The birth rate for the Maldives is somewhat higher than the world average, but the death rate is lower. More than one-fifth of the total population is under 15 years of age. Life expectancy is about 74 years for men and 79 for women.

Why Go To Maldives

You’ve seen photos of the Maldives before: picture-perfect private villas suspended over striking blue waters, alabaster white sand beaches and spectacular sunsets dipping into the horizon. The scenic beauty of the Maldives is something to behold, something you can’t quite understand until you’re there in person.

The island nation of the Maldives is popular with honeymooners looking for seclusion and adventurers looking to explore the depths of the sea on a scuba diving and snorkeling excursion. Travelers seeking relaxation can unwind at one of the island spas and all visitors should certainly spend a day exploring the Maldivian capital of Malé. The hotels in this region are also spectacular, ranging from underwater hotels to overwater private bungalows to incredibly beautiful resorts. However, getting to and staying in this tropical paradise requires patience (there are no direct flights from the United States) and plentiful cash. Located between the Arabian and Laccadive seas, roughly 500 miles southwest of Sri Lanka, the Maldives is about as isolated as you can get – and that’s just another one of its many allures.

The best time to visit the Maldives is from November to April. The island nation is warm and sunny year-round, but consists of a dry season and a wet, rainy season. There are pros and cons to visiting in each season. Travelers will experience the best weather in the Maldives between November and April, thanks to little precipitation and warm temperatures. Unfortunately, this is also the busiest time of year and, as such, the room rates at resorts are expensive. However, since each resort inhabits its own island, you won’t have to contend with throngs of crowds like you might during the high season in another destination.

May to October is considered the rainy season, with the islands seeing between 5 and 10 inches of precipitation monthly and often strong winds. Visitors will likely find better deals for this time of year (though, the term “deal” is relative, since the Maldives is a pricey location year-round). This time of year is popular with surfers, though, because the area sees bigger waves and better swells for surfing during these months.

The tourism industry, although nonexistent before 1972, underpins the services sector. Annually, more than 1.5 million tourists visit the Maldives. Its more than 130 resort islands include high-end hotel brands, and its marine geography offers unique diving and water sports opportunities as well as undersea accommodations, restaurants, and spas. By the mid-2010s the service sector accounted for four-fifths of the country’s GDP.

The rapid growth of the tourism industry left its mark on the labour market, which saw a dramatic shift away from agriculture and toward services. In part because of lack of training among the general population, a number of foreign workers from South Asia provide skills needed to help develop businesses. As businesses on resort islands away from the general populace demanded an increasing share of the total labour force, the participation rate of women, who are discouraged by the culture from living away from their families, fell substantially. About three-fifths of women participated in the labour force in the 1970s, but the rate dipped as low as one-fifth of women in the mid-1990s. By the 2010s, however, the participation rate had recovered to about half of women.

Beginning in 2011, the Maldives collected taxes primarily on the profits of businesses and financial institutions and on goods and services within the tourism sector. An income tax was implemented in 2020.

Transportation between islands and atolls is vital for the country. China and India, competing for influence over the strategically located Maldive Islands, have provided significant foreign direct investment to develop infrastructure that would further connect the islands. Boats provide the principal means of transport between the atolls, and scheduled shipping services link the country with Sri Lanka, Singapore, and India. The national airline carries passengers between several airports in the country as well as internationally. The airport at Male handles most international traffic, although there are other airports that serve limited international travel.

The unicameral legislature, called the People’s Majlis, meets at least three times per year. Its members are elected to five-year terms from Male island and from each of the 20 atoll groups into which the country is divided for administrative purposes. The number of representatives from each administrative division is determined on the basis of population, with a minimum of two per division. The 2008 constitution established Islam as the official state religion. Non-Muslims cannot become citizens, and the People’s Majlis is prohibited from making any law that contravenes the tenets of Islam. Other governmental bodies include civil service and human rights commissions.

The highest legal authority is the Supreme Court. Its judges are appointed by the president in consultation with the Judicial Service Commission, a body of 10 members appointed or elected from various branches of the government and the general public. The Judicial Service Commission independently appoints all other judges. There are no judicial term limits; the mandatory retirement age is 70. All judges must be Sunni Muslims. The Supreme Court bases decisions upon the constitution and Maldives law; in cases in which applicable law does not exist, Sharīʿah (Islamic law) is considered. Other courts are the High Court and trial courts.

The most prevalent health concerns are cardiovascular diseases, cancer, diabetes, and renal failure. Certain food- and waterborne illnesses present a slight risk, such as hepatitis and typhoid. Malaria was eradicated in 1984, and the Maldives became the first country in the region to be certified as malaria-free by the World Health Organization in 2015.

A health centre providing basic services can be found on each inhabited island, regardless of population size, and atolls typically have a higher-level facility or hospital on their capital island. Maldivians must go to Male for treatment of more serious ailments, however.