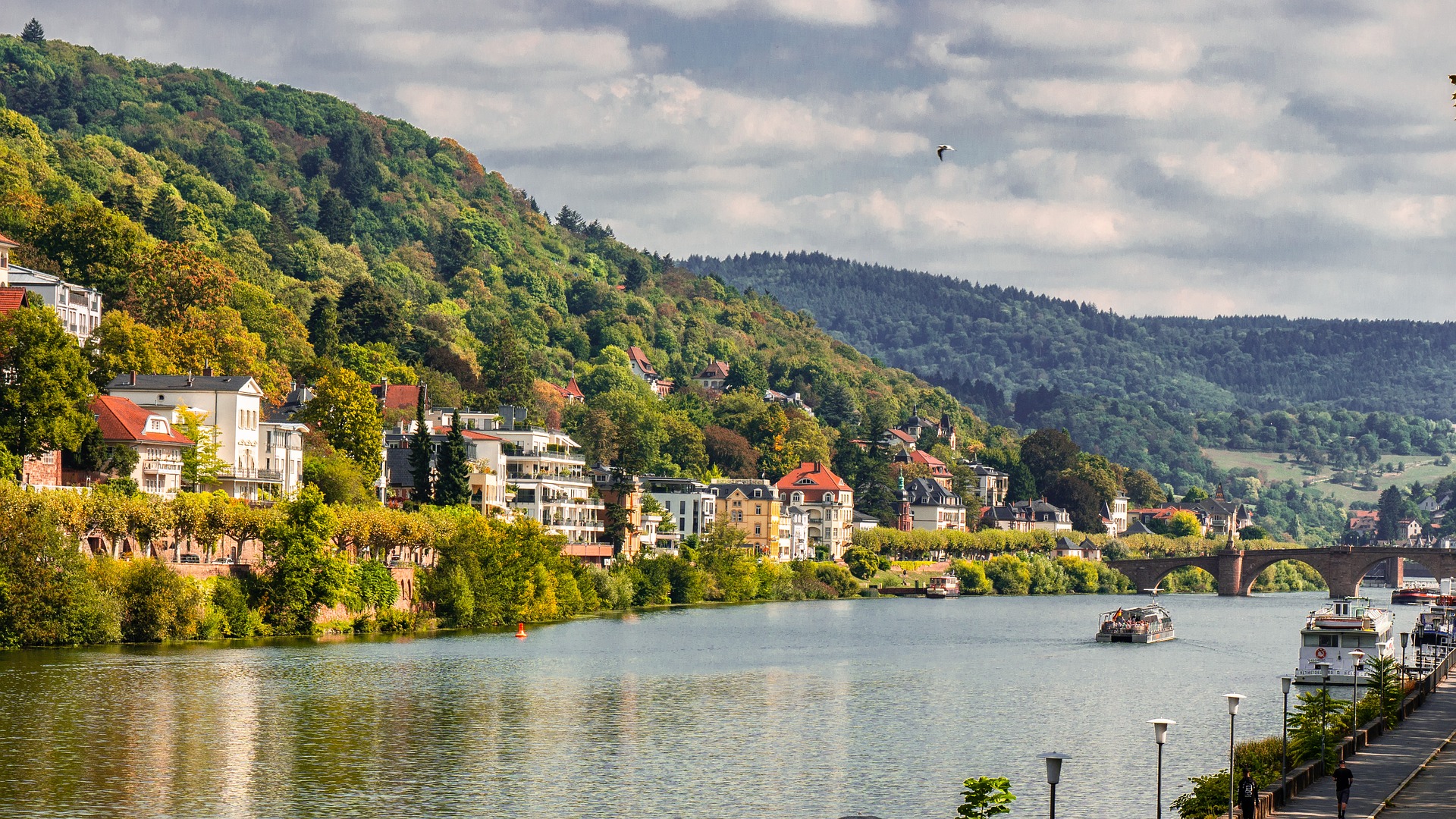 It is no secret that Heidelberg is a jewel among German travel destinations. Heidelberg is in the Neckar river valley right where the legend-rich Odenwald (Forest of Odes or Odin) opens up towards the plains of the Rhine Valley. Heidelberg is home to the oldest university in Germany (est. 1386). With 28,000 students, the Ruprecht-Karls-Universität (or Ruperto Carola, the Latin equivalent of its name) is one of Germany’s larger academic institutions and boasts the full spectrum of an ancient academy, from Egyptian Studies to Computer Linguistics. The faculties for Medicine, Law and Natural Sciences are considered to be among the best in Germany. The university fostered the establishment of several other world class research institutions such as the German Cancer Research Centre (DKFZ), the European Molecular Biological Laboratory (EMBL), Centre for Molecular Biology (ZMBH), Max Planck Institutes for Medicine, Astronomy, Nuclear Physics, among others. Generally speaking, Heidelberg is an academic city with a long and rich history and is similar in many ways to cities such as Cambridge or Oxford (Heidelberg and Cambridge, England are twinned).

During WWII, the city was almost completely spared allied bombings which destroyed many of Germany’s larger inner cities. As a result, Heidelberg has retained its baroque charm of narrow streets, picturesque houses and of course the world-famous Schloss (castle ruins). After World War II, the US Army built large barracks at the southern end of the city which housed up to 30,000 US military personnel and their families for more than six decades—up until 2012. In 2015, the US military housing was given to the German government. This massive area of town is currently largely abandoned (as of winter 2017) and it remains sealed off behind barbed wire fences and cameras (though the cameras may be vestigial). Heidelberg’s 150,000 inhabitants include roughly 38,000 students between the university and the other research institutes. With hundreds of thousands of tourists flocking to the city annually, Heidelberg is truly a culturally diverse and international destination, despite its small size.

Over the years, Heidelberg has attracted numerous artists, intellectuals, and academics from all over Europe and has sometimes been referred to as Germany’s unofficial intellectual capital. People who have lived and worked in the city include the poets Joseph von Eichendorff, Jean Paul, Goethe and Iqbal, scientists such as Bunsen and Kirchhoff, philosophers such as the founder of the “Illuminati” order von-Knigge, atheist Ludwig Feuerbach, existentialist Karl Jaspers, political theorist Hannah Arendt, architect Albert Speer, and many more. Mark Twain wrote in A Tramp Abroad:

The city’s most prominent feature is its all-seeing, all-knowing hilltop castle, Heidelberg Schloss. After being bashed and bruised by various wars and struck by lightning on more than one occasion, this sandstone brute is now in ruins. You can still visit the site and get a tour of the grounds but it’s the view that takes your breath away. Sitting on the Königsstuhl hill, the castle can be reached by a funicular railway or a steep hike. Find the world’s largest wine barrel in the castle’s cellars, visit the bizarre German Apothecary Museum or spend time in the still-beautiful Hortus Palatinus, the gardens which were once described as ‘the eighth wonder of the world’.

Altstadt (Old Town) is home to the ancient university, the Heiliggeistkirche (Holy Spirit Church) and lots of lovely eateries and buzzy bars. Wander around the shops and quirky little museums and be sure to check out the Studentenkarzer, the university’s ‘jail’ where students were once locked up as a punishment. It soon became a right of passage for students who graffitied the walls with colourful art and slang.

Our aparthotel is a short walk to Altstadt and all of the city’s top sights. Head to the riverside for restaurants and cafés and try some of the local delicacies – schnitzel is always a good idea. When you’ve explored all the city has to offer (good luck!) relax in your home away from home with a drink in our Staycafé.

Heidelberg is a flirt! Prepare to be swept away by majestic castles and cobbled streets. Whether you’re here to work or play, our serviced hotel rooms are the perfect base to explore the city, giving you flexibility and comfort for a relaxing stay. Located within walking distance of all the city’s top sights and surrounded by some of Germany’s most stunning nature trails, Staycity Heidelberg is your ideal home away from home. City life and country life go side by side here. Explore Altstadt with its beautiful baroque architecture and toy town vibe and later take the Philosopher’s Way along the river to an enormous Nazi amphitheatre in the middle of the forest. There are a number of beautiful parks along the river and the majestic Königstuhl hill to hike. Catch the traditional funicular railway from Kornmarket which stops at Heidelberg Schloss and then continues to the top of the hill for jaw-dropping views of the city.

This is what sunsets are made for. At Staycity Heidelberg we have everything you need for total flexibility and convenience throughout your stay. So book now to walk in the footsteps of philosophers, artists and writers who were inspired by this historic, fairytale city.