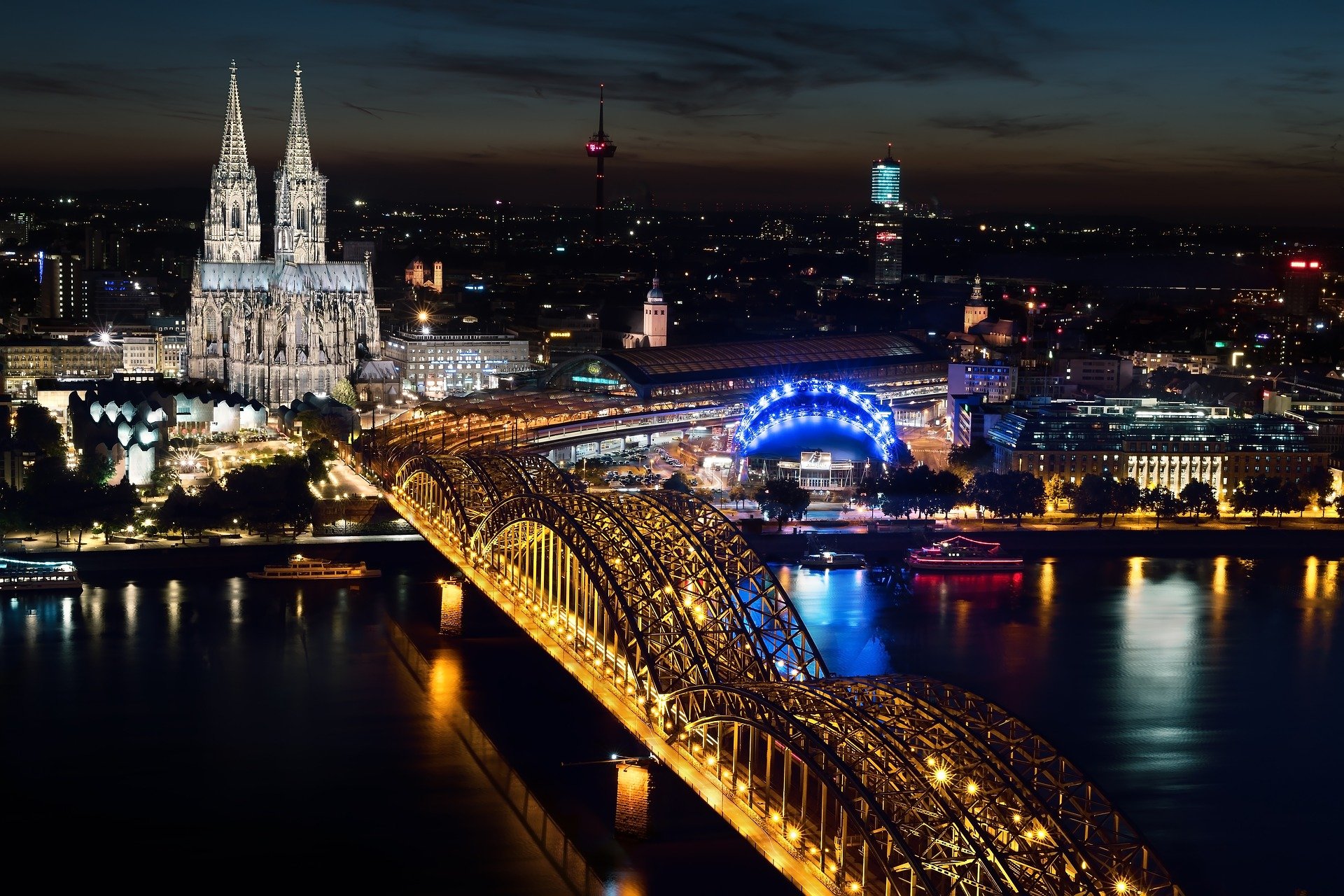 Cologne, German Köln, fourth largest city in Germany and largest city of the Land (state) of North Rhine–Westphalia. One of the key inland ports of Europe, it is the historic, cultural, and economic capital of the Rhineland.

Cologne’s commercial importance grew out of its position at the point where the huge traffic artery of the Rhine (German: Rhein) River intersected one of the major land routes for trade between western and eastern Europe. In the Middle Ages it also became an ecclesiastical centre of significance and an important centre of art and learning. This rich and varied heritage is still much in evidence in present-day Cologne, despite the almost complete destruction of the Inner City (Innenstadt) during World War II. Cologne is the seat of a university and the see of a Roman Catholic archbishop. Its cathedral, the largest Gothic church in northern Europe, was designated a UNESCO World Heritage site in 1996; it is the city’s major landmark and unofficial symbol. Area city, 156 square miles (405 square km). Pop. (2006 est.) 989,766.

The distinctive flavour to the city of Cologne is often linked to the city’s inhabitants, or Kölsche, who take an enormous amount of pride in their city. Cologne is a traditionally Ripuarian-speaking city, though this has mostly been replaced by German, which is now the main language of the city. English-speaking guides and information are available for many of the landmarks of the city. For tourists who speak German and wish to practice it, the citizens usually have a lot of patience with those trying to come to grips with the language. Cologne’s citizens are very friendly and jovial people, welcoming tourists of all types and with all interests.

Away from the landmarks, workers of the Deutsche Bahn (German railways) often speak English reasonably well, and ticket machines have a language selection feature. In general, older people in Cologne tend to have little or no knowledge of English, while younger Germans and those working in the business world tend to be reasonably proficient. Language is rarely a strong barrier, so this shouldn’t be too much of a worry for the average tourist. Just approach a friendly native and use a smile on your face.

Cologne has an excellent public transport network consisting of trams, local trains and buses. Bicycles are also available for hire on the northern side of the Hauptbahnhof. Local transport systems rarely provide announcements in English, but network maps are commonly available to assist with your journey. Those wishing to explore area away from the central city should plan their journey and potential connections before leaving. The KVB (Kölner Verkehrs-Betriebe) website is a good source of public transport information.

The relaunch for the interiors industry

imm cologne is returning in January 2022! Together with the interiors industry, we will offer the world of interior design the platform it urgently needs to establish and expand international business relationships by staging an outstanding and highly relevant event.

Get set to present exciting innovations in person again, to do business face to face and to finally experience new design with all your senses.

Take advantage of this opportunity today by securing your place at the relaunch for the interiors industry now!

Cologne is situated about 21 miles (34 km) northwest of Bonn and 25 miles (40 km) southeast of Düsseldorf. It lies 210 feet (65 metres) above sea level, just below where the Rhine enters the fertile North German Plain. The river at this point is navigable to seagoing vessels. The immediate surroundings of Cologne are varied. The picturesque hills of the Bergisches Land lie to the east, while on the west is another group of hills forming a chain called the Ville. The North German Plain stretches away to the north and northwest, and the Rhine Valley winds to the southeast toward Bonn.

The greatest distance across the city from west to east is about 17 miles (27 km) and from north to south about the same. There are 85 districts, divided into nine Bezirke (city areas). Most of the city lies on the left (west) bank of the river, but it also incorporates a cluster of suburbs on the right bank, some of which were annexed in 1975. The climate of the region is temperate but humid. Average temperatures in the Cologne area are 36 °F (2 °C) in January and 64 °F (18 °C) in July.

The semicircular shape of the Inner City was originally determined by a defensive wall, 4 miles (6 km) long, that was completed in about 1200. The wall enclosed several formerly separate parishes and afforded protection for some 35,000 to 40,000 people. (At that time Cologne was bigger than Paris.) The flat side of the semicircle was formed by the Rhine. In the 1880s the medieval fortifications were demolished and replaced by a chain of ring roads, called the Ringstrassen.

Although Cologne has spread far beyond the confines of the Ringstrassen, its focal point is still within this area, the Inner City. There are found the main shopping and business streets—such as the Hohe Strasse (north-south) and Schildergasse (west-east), both of which have been closed to motor vehicles—as well as the city’s historic buildings. Several bridges span the river at Cologne; five of them were rebuilt after World War II, and the rest were postwar additions.

A large proportion of Cologne’s area consists of parkland, woods, lakes, sports facilities, and open areas. Two major park systems follow roughly the concentric patterns of old fortifications around the Innenstadt. The first is just outside the Ringstrassen and includes (from north to south) zoological and botanical gardens, the Stadtgarten, and the Volksgarten. The second, the Outer Greenbelt, is a wooded area that stretches for miles around the western and southern edge of the city and contains extensive recreation grounds and the Müngersdorfer Stadium. On the right bank of the river is the Rhine Park, a large green area adjacent to the KölnMesse, a convention centre with halls for fairs and exhibitions. Also located on the right bank is a covered multiuse arena offering space for sporting events and musical concerts.